The Elysium Hotel is a gay hotel located in Mykonos town and is constructed with traditional Mykonian architecture. The hotel shares a spectacular panoramic view of the historic town of Mykonos and the crystal clear waters of the Aegean Sea. It boasts 18 standard hotel rooms, 22 superior deluxe rooms and 2 connecting superiors.

For your convenience, each room is fully equipped with air-conditioning, broad band internet access, hairdryer, direct dial phone, refrigerator, safe deposit box, satellite TV and a bath tub. The superior deluxe rooms have all the features and amenities of standard hotel rooms with the addition of fully installed personal computer with web camera and king size beds. Kitchenettes are also available in some superior deluxe rooms. The complimentary breakfast consists of an American buffet.

For your dining pleasure the hotel has an on-premises restaurant snack bar. Be sure to check out the famous Sunset Bar by the pool is home to many parties and spectacular shows graced by professsional dancers, all staged in an unmatched setting of breathtaking views and ambience.

Mykonos is found in the heart of Cyclades. It is an island with a double personality: it is one of the most picturesque Cycladic islands, with picturesque streets, white houses, chapels, windmills and simultaneously one of the most known tourist destinations, which has been distinguished at a world level for its cosmopolitan character. Clubs, bars and beaches of the island have all been filled for many decades with tourists, both eponymous and anonymous. Mykonos is an island that guarantees that its visitors will have fun, no matter if they are worshippers of night life and intense emotions or the kind of travelers that wish to get to know the place. Guests come to visit sights such as archaeological sites, monuments, churches, picturesque settlements and familiarize themselves with the tradition and life of the residents.

Out and About Gay Travel Guides are available at each and every World Rainbow Hotel. They are prepared by the concierge and staff at the hotel and aim to provide you with up to date information about the local gay and lesbian scene. 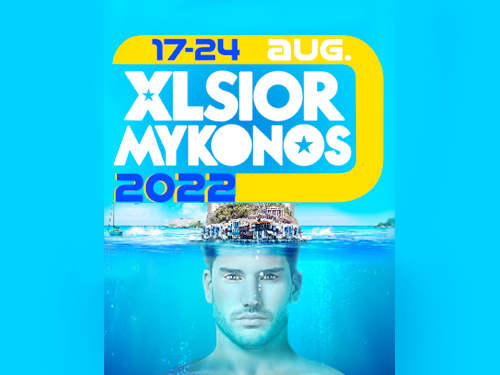 XLSIOR Mykonos welcomes 30,000 travellers from around the world and will be held from the 17-24th August 2022.