Visit Britain’s recently launched campaign targetting the LGBTQ+ market, comes in a time where Gay marriage in the UK is now predicted to drive a much welcomed boost in the tourism industry. The campaign is in response to the legalisation of same-sex marriage, and aims to increase revenue by £1m in a year.

There’s no doubt that targeting LGBTQ+ consumers—known as the pink pound—can be lucrative. According to a study by Out Now Consulting, and referenced by The Telegraph, there are more than 3m gay people in Britain, with an average annual salary of £31,000 and collective pre-tax income of £96bn. Furthermore, Out Now Consulting found that the first year of Civil Partnerships in the UK delivered a £130m boost to the UK economy.

Set to inspire gay consumers to experience the romance in Britain, and create their own perfect honeymoon, Visit Britain has listed the top gay scenes and destinations in the UK. Here is World Rainbow Hotels’ take on the top 5: 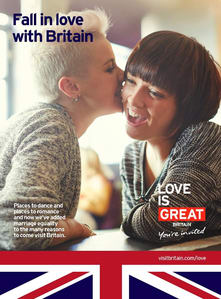 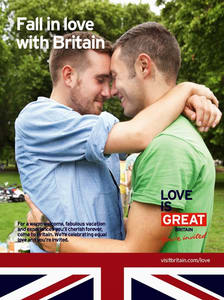 With its very own Gay Village, Birmingham is a buzzing destination perfect for shopping and filled with great restaurants. The Gay Village is located around Hurst Street, close to the city’s major shopping centres, The Mailbox and Bullring. There are also a variety of bars and clubs where you can unwind and get down.

LGBTQ+ major events:Birmingham Pride, kicks off the summer of Pride in Britain from 24 – 25 May.
Where to stay: Find the best gay-friendly hotels in Birmingham.

London’s gay scene is, un-surprisingly, big and diverse. Head on down to Soho for some gastronomical delights, at some of the town’s most exciting restaurants, browse through the trendy shops or enjoy a cuppa at one of the many small and bohemian coffee shops spilling onto the pavement. This is also where the majority of gay clubs and bars are. London offers year round entertainment with plenty of LGBTQ+ shows, literary events, art festivals and music concerts happening across the city.

LGBTQ+ major events: The world famous Pride in London parties between 22 – 29 June.
Where to stay: Search for a gay-friendly hotel in London.

Canal street is where the action is at, it is after all where Manchester’s Gay Village is located, and where the annual Manchester Pride parade takes off. The streets here are lined with quirky bars, shops, cafes and nightclubs.

LGBTQ+ events: The summer of pride culminates with a big party and parade at Manchester Pride (22 – 25 August).
Where to stay: Enjoy a warm northern welcome at one of our listed Manchester gay-friendly hotels.

A vibrant university city with plenty of Welsh charm and culture, Cardiff has a fun gay scene with many gay-frienly bars and clubs. The best venues sit around Charles Street and Churchill way, slap-bang in the city centre. Plenty of romantic sights as well, including Cardiff bay or Cardiff’s castle wich offers breath-taking views over the city.